This post is part of The Containerization Chronicles, a series of posts about Containerization. In them, I write about my experiments and what I’ve learned on Containerization of applications. The contents of this post might make more sense if you read the previous posts in this series.

Now that we have the project integrated with a Continuous Integration server, where we run the tests and report back to GitHub pull requests with the results of the test run and the coverage, we can deploy our project and make it available on the Internet.

We will do so with Heroku. I have chosen Heroku because it allows me to perform these experiments for free.

If you want to jump into the code, this is the tag for this post.

Heroku will keep our application up on the Internet for 30 minutes after the last request to it. After those 30 minutes, it will go to “sleep” until a request to it is made. At that point, it will take some 20 seconds to wake up and gives us a response, but that’s fine, these are just experiments.

After creating our account on Heroku, we need to create a pipeline. We will call it ppln-explicit-arch-php-sfn. By default, a pipeline will have two environments:

The workflow with Scrutinizer and Heroku

What we would like to have is a workflow in this format:

For this, we need to limit Scrutinizer to monitoring only the master branch, so that only PRs and merges to master would trigger test runs and deployments. Otherwise, we would have Scrutinizer running tests and maybe deployments when it’s not needed, eventually creating a job queue and slowing down the whole process.

A challenge: Scrutinizer limitation as a CI

Unfortunately, Scrutinizer doesn’t trigger deployments when we make a PR, although it does trigger the tests run.

This means that we can not use PRs for deployment to staging, so the alternative is to use pushes to specific branches in order to trigger deployments to staging. We will make it so that whenever we make a push to a branch starting with stg-, Scrutinizer will deploy to a staging app on Heroku.

And this, however, means two things:

This is, of course, a workaround. It’s not nice. I don’t particularly like it. But I also don’t want to put time investigating another CI engine at this moment, although I will surely do it at a later time.

So the actual workflow will be:

For the workflow above we need to configure Scrutinizer as follows, on their website: 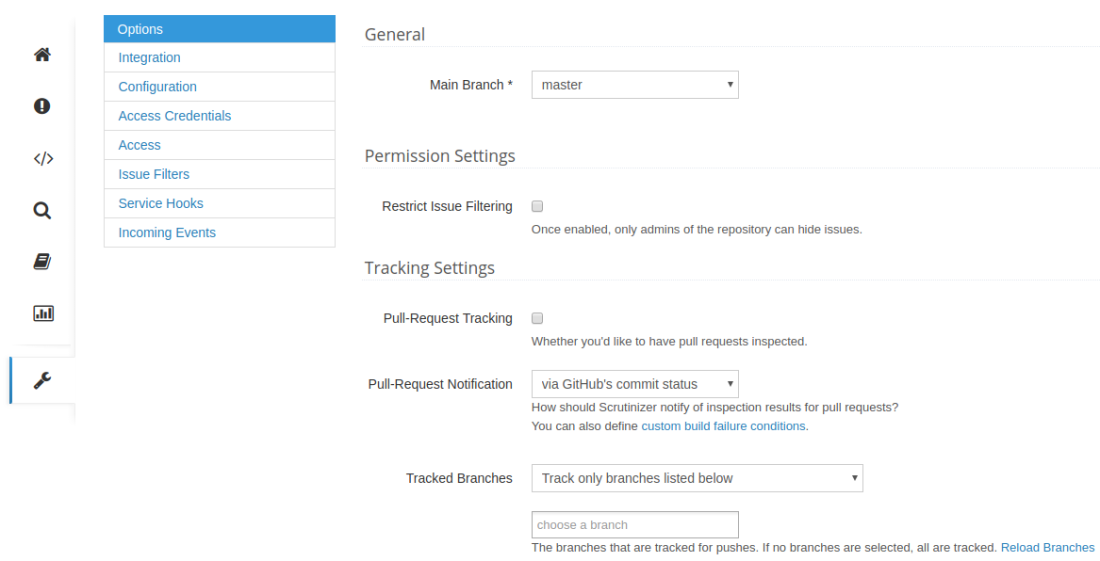 As you can see above, we are not tracking PRs nor any specific branches.

In our .scrutinizer.yml config we will need to add a snippet so that Scrutinizer knows we want to deploy to Heroku:

The script receives two arguments, the first is the stage of the Heroku app in the pipeline (either staging or production), and the second is the Heroku app name, which will be the same as the branch being deployed.

The Makefile additions are trivial:

Running the application in Heroku

If we take a look at the deployment script above, we will notice that when we deploy to Heroku, we simply send a docker image to the Heroku registry.

The only thing Heroku does is start the container, so whatever the container entry point is, that’s what will be running. This seems sensible, but Heroku brings up the container making our application listen on a random port every time and makes that port available in the environment.

Our image current entry point is set in the production image dockerfile:

As we can see, the port where our application listens is hardcoded there, and we need to make it be in sync with what Heroku puts in the environment variable.

As stated in the Docker documentation, we can simply do this:

Unfortunately, I couldn’t make this work!! (if you know how to make it work, please let me know!!) So I needed to create a script that the dockerfile will reference and that script will be able to get the port from the environment.

The script to bring the application up is as follows:

And we change the dockerfile accordingly:

Please, feel free to share your thoughts and/or ways to improve this.

2 thoughts on “Deployments with containers”