In a data-centric application, the application has no knowledge of the business processes, so the domain is unable to have any verbs, and is unable to do anything else aside from changing raw data. It becomes a glorified abstraction of the data model. The processes exist only in the heads of the application users, or even in post-its pinned to the computer screen.

A non-trivial, and really useful, application aims to remove the “process” burden from the user’s shoulders by capturing their intentions, making it an application capable of processing behaviours as opposed to simply storing data.

CQRS is the result of an evolution of several technical concepts that work together to help provide the application with an accurate reflection of the domain, while overcoming common technical limitations.

As Martin Fowler states, the term ‘command query separation’ was coined by Bertrand Meyer in his book “Object Oriented Software Construction“ (1988) – a book that is said to be one of the most influential OO books, during the early days of OO.

Meier defends that, as a principle, we should not have methods that both change data and return data. So we have two types of methods:

In other words, asking a question should not change the answer and doing something should not give back an answer, which also helps to respect the Single Responsibility Principle.

Nevertheless, there are some patterns that are exceptions to this rule as, again, Martin Fowler says, the traditional queue and stack implementations pop an element of the queue or stack, both changing the queue/stack and returning the element removed from it.

In practice, this means that instead of having a user execute a “CreateUser” action, followed by an “ActivateUser” action, and a “SendUserCreatedEmail” action, we would have the user simply execute a “RegisterUser” command which would execute the previously mentioned three actions as an encapsulated business process.

A more interesting example is when we have a form to change a client data. Let’s say that the form allows us to change the client name, address, phone number and if he is a preferred client. Let’s also say that a client can only be a preferred client if he has paid his bills. In a CRUD application, we would receive the data, check if the client has paid his bills and accept or reject the data change request. However, we have here two different business processes: Changing the client name, address and phone number should succeed even if the client hasn’t paid his bills. Using the command pattern we can make this distinction clear in the code by creating two commands representing the two different business processes: one to change the client data, and another one to upgrade the client to the preferred status, both processes being triggered by the same UI screen.

Provide us with the right level of granularity and intent when modifying data. That’s what commands are all about.

It’s good to remember, however, that this does not mean that there can’t be a simple “CreateUser” command. CRUD use cases can perfectly coexist with use cases that carry intent, that represent a complex business process, but it’s crucial not to mistake them.

Technically, the Command Pattern, as described in Head First Design Patterns, will encapsulate all that is needed to execute some action or sequence of actions. This is especially useful when we have several different business processes (Commands) that need to run from the same location, in the same way, so they need to have the same interface. For example, all commands will have the same method execute() so that, at some point, any command can be triggered independently of what command it is. This will allow for any business process (Command) to be queued and executed when possible, be it in sync or async.

In the book Head First Design Patterns, the example given is that of a remote control for lights in a house. I will go with the same example, although to pinpoint where I feel it falls short.

This is how such a system could be designed:

It’s a naive design, of course, it doesn’t even take into consideration a DIC and I didn’t even use proper UML. But I hope it serves the purpose, so let’s go through the diagram above: As a reaction to input from some delivery mechanism, the LightController is instantiated with a CommandInvoker as a constructor argument and a specific controller action is triggered, ie. the kitchenLightOnAction. This action will instantiate the appropriate light, ie. KitchenLight, and will also instantiate the appropriate Command, ie. KitchenLightOnCommand, passing it the light object as a constructor argument. The command is then given to the CommandInvoker which will execute it, at some point. To turn the light off we would create another Action and another Command,  but the design would be essentially the same.

The implementation problem, at this point, is that the logic in the command will be the same, but the data (the percentage of power) will be different every time. So we should create a command that has the same logic and just executes with different data, but then we have the problem of the interface execute() method not accepting arguments. If it did, it would break the whole technical idea of the Command, in the first place (encapsulate all that is needed to execute some business process without knowing exactly what is going to be executed).

Of course, we could work around this by passing the data to the command in its constructor, but that would not be elegant. It would, in fact, be a hack because that data is not something the object needs in order to exist, it is something it needs to execute some of its logic, so that data is a dependency of the method, not a dependency of the object.

We might also be able to use native language constructs to work around this, but that would not be elegant either.

What we can do, to solve the mentioned Command Pattern limitation, is to apply one of the oldest principles in OO: separate what changes from what doesn’t change.

In this case what changes is the data and what doesn’t change is the logic executed in the command so we can separate them into two classes. One will be a simple DTO to hold the data (we will call it Command), and the other will hold the logic to be executed (we will call it the Handler) which will have a method to trigger the logic execution ie. execute(CommandInterface $command): void. We will also evolve the Command Invoker into something capable of receiving a Command and figure out what handler can handle it. We will call it a Command Bus.

Furthermore, by changing the user interface patterns a bit, many commands don’t need to be processed immediately, they can be queued and executed asynchronously. This has some advantages that make the system more robust:

The usual way that the command bus achieves this is by using Decorators that wrap around the command bus (or a decorator already decorating it), in a matryoshka kind of construction. 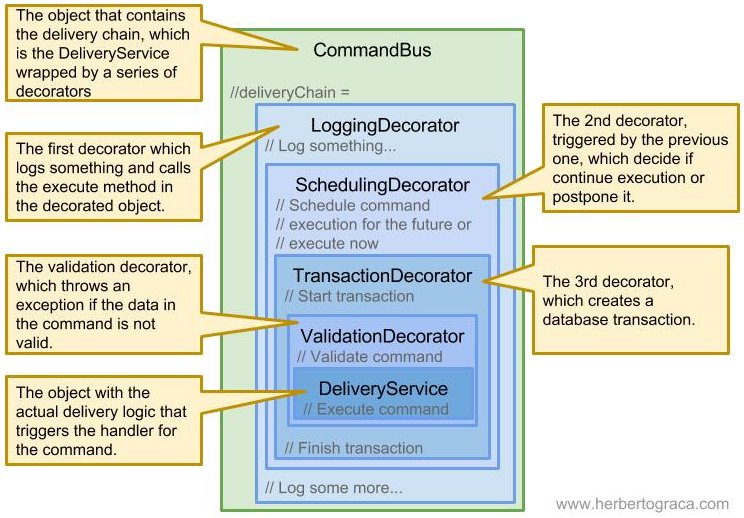 This allows us to create our own decorators and to configure the (maybe 3rd party) command bus to be composed by whatever decorators, in whatever order, adding our custom functionality to the command bus. If we need command queueing, we add a decorator to manage the queueing of commands. If we don’t use a transactional DB, we don’t need a decorator to wrap the handler execution around a DB transaction, and so forth, so on.

By putting together the concepts of CQS, Command, Query and CommandBus we finally reach CQRS. CQRS can be implemented in different ways and up to different levels, maybe only the Command side, or maybe not using a Command Bus. For the sake of completion, this is a diagram that represents how I see a full CQRS implementation: 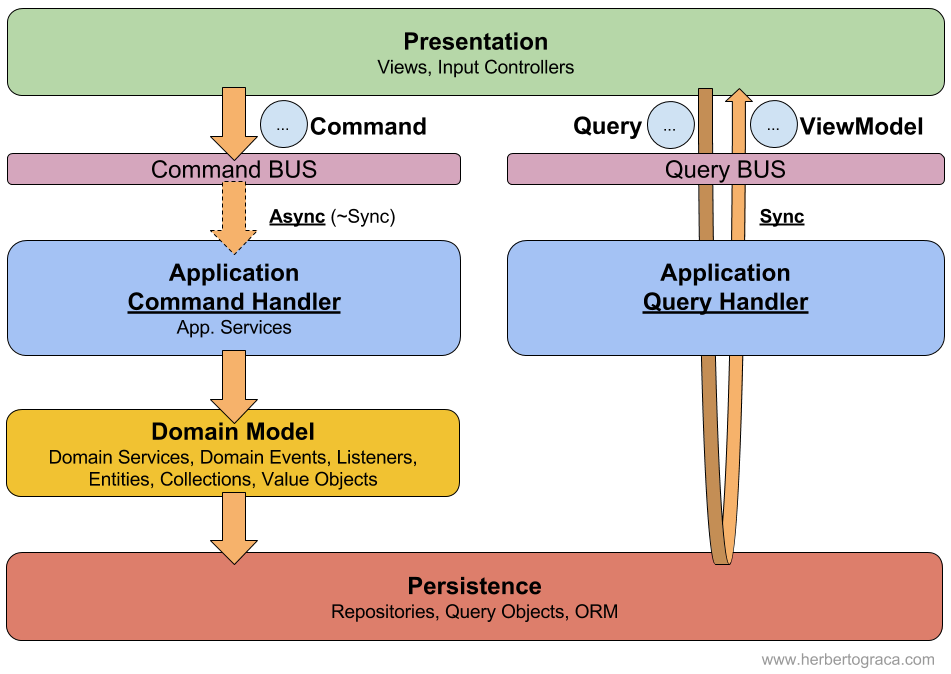 Following CQS, the Query side will only return data, not changing it at all. Since we don’t intend to execute a business process on that data, we don’t need business objects (ie. entities), so we don’t need an ORM to hydrate entities for us, and we don’t need to get all the data needed to hydrate an entity. We just need to query for raw data to show to the user and exactly the data that we need in the template shown to the user!

This is a performance gain right here: When querying for data we don’t need to go through the business logic layers to get it, we only do and get exactly what we need.

At this point, if we have a specialised DB view for each template, which makes the querying trivial, why do we need an RDBMS for our reads?! Maybe we can use a document storage for our reads, like Mongo DB or even Redis, which are faster. Maybe yes, maybe not, I’m just saying it might be worth thinking about it if the application is having performance issues on the read side.

The querying itself can be done using a Query object that returns an array of data to be used in the template, or we can use something more sophisticated like a Query Bus that, for example, receives a template name, uses a query object to query the data and returns an instance of the ViewModel that the template needs.

This approach can solve several problems identified by Greg Young:

As explained earlier, using commands we shift the application from a data-centric design to a behavioural design, which comes in line with Domain Driven Design.

By removing the read operations from the code that processes commands, from the Domain, the problems identified by Greg Young just vanish:

The “one-to-many” and “many-to-many” relationships between entities can have a severe impact on the ORM performance. The good news is that we seldom need those relations when processing commands, they are mostly used for querying and we have just moved the querying away from the command processing so we can remove those entity relationships. I’m not talking here about the relations between tables in an RDBMS, those foreign key constraints should still exist in the write DB, I’m talking about the connections between entities which are configured at the ORM level.

Do we really need a collection of orders on the customer entity? In what command would we need to navigate that collection? In fact, what kind of command would need any one-to-many relationship? And if that’s the case for one-to-many, many-to-many would definitely be out as well. I mean, most commands only contain one or two IDs in them anyway.

Following the same thoughts as for the Query side, if the write side is not being used for complex queries, could we replace the RDBMS for a document or key-value storage with the serialised entities? Maybe yes, maybe not, I’m just saying it might be worth thinking about it if the application is having performance issues on the write side.

After a command is processed, and if it was successfully processed, the handler triggers an event notifying the rest of the application about what has happened. The events should be named as the command that triggered it, except that, as is the rule with events, it should be in the past tense.

Nevertheless, it’s good to keep in mind that although CQRS provides for a design style and several technical solutions that can make an application very robust, that doesn’t mean that all applications should be built this way: We should use what we need, when we need it.

(The ones in bold are the ones I consider most valuable.)

1999 – Bala Paranj – Java Tip 68: Learn how to implement the Command pattern in Java

9 thoughts on “From CQS to CQRS”