Layering is a common practice to separate and organise code units by their role/responsibilities in the system.

In an object-oriented program, UI, database, and other support code often gets written directly into the business objects. Additional business logic is embedded in the behaviour of UI widgets and database scripts. This happens because it is the easiest way to make things work, in the short run.

When the domain-related code is diffused through such a large amount of other code, it becomes extremely difficult to see and to reason about. Superficial changes to the UI can actually change business logic. To change a business rule may require meticulous tracing of UI code, database code, or other program elements. Implementing coherent, model-driven objects becomes impractical. Automated testing is awkward. With all the technologies and logic involved in each activity, a program must be kept very simple or it becomes impossible to understand.

What it means to be layered

In a layered system, each layer:

In a layered architecture, the layers can be used in a strict way, where a layer only knows the layer directly beneath it, or in a more flexible approach where a layer can access any layer beneath it. Both Martin Fowler and my own experience tells me that the second case seems to work better in practice as it avoids the creation of proxy methods (or even complete proxy classes) in the intermediary layers, and can degrade into the anti-pattern of the Lasagna Architecture (more about it below).

Although software development started during the 50s, it was during the 60s and 70s that it was effectively born as we know it today, as the activity of building applications that can be delivered, deployed and used by others that are not the developers themselves.

At this point, however, applications were very different than today. There was no GUI (which only came into existence in the early 90s, maybe late 80s), all applications were usable only through a CLI, displayed in a dumb terminal who would just transmit whatever the user typed to the application which was, most likely, being used from the same computer.

Applications were quite simple so weren’t built with layering in mind and they were deployed and used on one computer making it effectively a one-tier application, although at some point the dumb client might even have been remote. While these applications were very simple, they were not scalable, for example, if we needed to update the software to a new version, we would have to do it on every computer that would have the application installed.

Layering during the 80s and 90s

During the 1980s, enterprise applications come to life and we start having several users in a company using desktop computers who access the application through the network.

At this time, there were mostly three layers:

With this shift in usability context, layering started to be a practise, although it only started to be a common widespread practice during the 1990s (Fowler 2002) with the rise of client/server systems. This was effectively a two-tier application, where the client would be a rich client application used as the application interface, and the server would have the business logic and the data source.

Layering after the mid 90s

Roughly between 1995 and 2005, with the generalised shift to a cloud context, the increase in application users, application complexity and infrastructure complexity we end up seeing an evolution of the layering scheme, where a typical implementation of this layering could be: 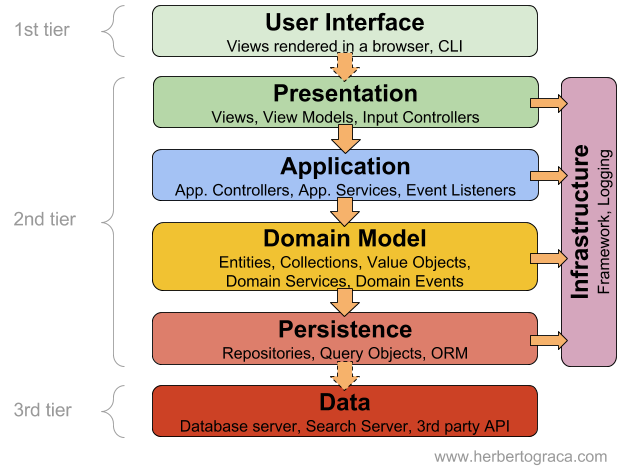 This is a three-tier architecture pattern, also known as n-tier. It is a scalable solution and solves the problem of updating the clients as the user interface lives and is compiled on the server, although it is rendered and ran on the client browser.

Layering after the early 2000s

In 2003, Eric Evans published his emblematic book Domain-Driven Design: Tackling Complexity in the Heart of Software. Among the many key concepts published in that book, there was also a vision for the layering of a software system: 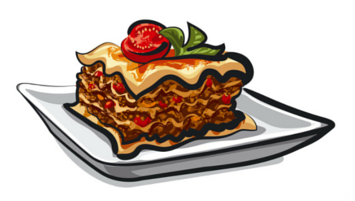 Lasagna Architecture is the name commonly used to refer to the anti-pattern for Layered Architecture. It happens when:

Layered Architecture is one more way to provide for separation of concerns, encapsulation and decoupling, by grouping code units by their functional role within the application.

However, as most things in life, too much is counter productive! So the rule-of-thumb is: Use just the layers we need, the tiers we need, and nothing more! We must not get carried away chasing an architectural holy grail, which does not exist. What does exist is a need, and the best possible fit for that need. Which is part of Lean, btw.

Furthermore, it’s important to note that this top/down approach to layering is outdated. It is no longer what we should do in modern software development, there are new and better ways of thinking of an application layer. I will talk about then in following posts.